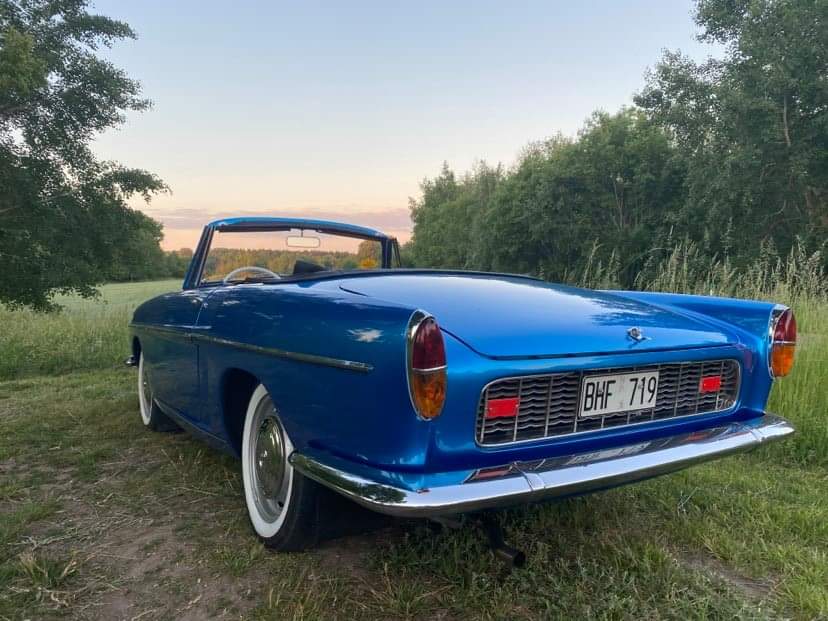 This is a magnificent Renault Floride sold new in Sweden, October 21st 1961 and since then only had five owners.

In 1972 the car was sold to a well renowned Renault enthusiast who in the beginning of the 80’s started a restoration that would last for almost 30 years.
In 2011 the car was finally finished and restored to the owner’s desire and choices and has some modifications from the original model.

As visibel on the pictures the car got a frame off restoration where everything has been exchanged and updated.
It is now painted in a stunning Jamaica blue and has a color matching interior what makes it to something really special!

The car has an engine from the R10, 1108 cc and 52 bhp with the cooler fitted behind the engine, while the original engine had 845 cc and 39 bhp. It is equipped with a 4-speed gearbox.
The air vents on the side were removed when restored to be more similar to the later model Caravelle. Cooling is no issue anyway, it gets the needed cooling from underneath.

The recent owner has made a minor restoration and update of the engine the latest years. - Detailed description of what has been done can be given on request. - The hardtop with skyport is foliated in white (originally black) and can easily be removed if wanted. The car got a new interior one year ago as shown on the photos. The material of the seats is vinyl and fabric in colours to match the Jamaica blue paint. This Floride is equipped with a modern Retro stereo (Bluetooth and USB) and also has hazard warning lights installed.

The car is registered in Sweden (EU-country) and has passed the technical control. On request we can send you videos of the car and other quality reports so if needed you can take your buying decision safely even without checking the car in person.